Risking Everything: Stories of Niagara’s Freedom Seekers and the Making of a Monument

This short documentary tells a story about the many ways stories are told: in song and the singers, in clay and the hands that mold it, and in the landscapes that create us.

Filmed, directed and produced by Emmy award winning and 5 time Emmy nominee CBS cameraman Isadore Bleckman, Risking Everything is a story with many voices. Those of ancestors of fugitive slaves who crossed the Niagara River seeking freedom in Canada in the early to mid-1800s and ancestors of the Underground Railroad conductors that helped them escape. The film also follows the making and installation of the Freedom Crossing Monument in Lewiston, New York.

Legendary cameraman Isadore (“Izzy”) Bleckman has worked in television film and video for more than 50 years, first with Movietone News and then with CBS News, doing his Emmy Award-winning camera work for “The Evening News” and special reports; for “On the Road” with Charles Kuralt, for almost two decades; and for “CBS Sunday Morning.” 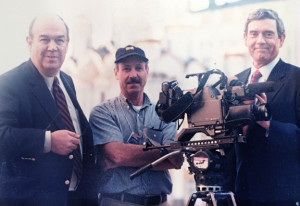 Since Izzy’s retirement from CBS News in 2002, he has continued to work in film. He produced a film on photographer Milton Rogovin, and another on the last of Buffalo’s grain scoopers, and served as editing consultant on the documentary “Luminous Shadows: The Artists of Eastern Cuba.” He was also a consultant on Acorn Media’s release of the “On the Road” DVD collection, and has given numerous audio-visual presentations in the Buffalo NY area where he lives with his wife, Mary Roseberry.

Mary and Izzy and Izzy’s daughter, Sheera Bleckman, began research and filming on the current project in 2009 when they first learned that a monument was being created in nearby Lewiston, NY to honor those who actively resisted the violence of slavery along that stretch of the Canadian border.

For more information or to schedule a viewing, please contact Mary Roseberry.

Copyright © 2019 Risking Everything: Stories of Niagara’s Freedom Seekers and the Making of a Monument. All Rights Reserved.